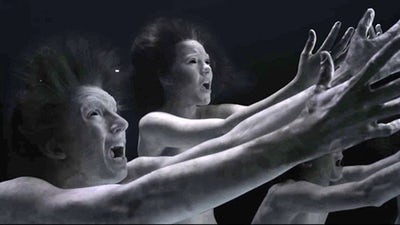 When you think of Halloween you might think of scary movies, but the best horror movies are actually released throughout the year, scaring the crap out of you when you least expect it. And not surprisingly, 2018 is not going to be any different, with a bunch of movie terrors on the way. If you’re anxiously awaiting The Conjuring 3, then check out the spin-off film, The Nun. Or if you love the Halloween movies, there’s a reboot being unleashed in October. Added to that, we’re going to be terrorized again by new installments of The Purge (and its presentation of a world where, one night a year, anything goes), and the Predator (who Arnold Schwarzenegger once referred to as “one ugly MF”).

From there, we’ve got an assortment of mansion-haunting ghosts, possessed people, serial killers, creatures that are drawn in by sound, so shut the hell up (the creepy A Quiet Place); and a new man vs shark adventure with The Meg. But this isn’t Roy Scheider or Blake Lively dealing with your average great white in Jaws or The Shallows, instead it’s Jason Statham taking on a 70-foot prehistoric shark that can take down a T-Rex.

Skeptical? Check out this guide for yourself. But don’t say we didn’t warn you.

After the sudden death of her family, firearms heiress Sarah Winchester (Helen Mirren) becomes convinced that she’s haunted by the souls of those killed by guns). In response, she has a mansion constructed with the idea of keeping the spirits away from her (note to Sarah: they’re ghosts; walls can’t keep them out). Skeptical psychiatrist Eric Price (Jason Clarke) comes to the mansion to examine her psychologically and comes to realize that she may be more right than anyone suspects.

Set in 1920 Ireland, Irish twins Rachel (Charlotte Vega) and Edward (Bill Milner) live in their dilapidated family estate, sharing each night with an evil presence that gives them three rules: they must be in bed by midnight; they may not permit an outsider past the threshold; if one attempts to escape, the life of the other is placed in jeopardy. Seems simple enough, but then a war veteran shows up and there is an instant attraction between he and Rachel. Rules are broken and there’s hell to pay. Hey, didn’t these people ever see Gremlins? Oh, wait, that came out 64 years after the story is set. Never mind.

A family ends up staying in a secluded mobile home park (that should have been their first clue that things were going to go south — never go secluded) and find themselves attacked by a trio of masked psychopaths.

Claire Foy plays a young woman who is involuntarily committed to a mental institution. There it seems that her greatest fear has come to life, but has it truly done so or is part of her psychosis? Maybe her fear is she becomes the Queen of England and struggles with the burden? Or maybe that’s Foy’s show The Crown. Don’t think that’s as dark as this one.

A family is forced to live in isolation, finding it necessary not to make any sounds in fear of drawing in mysterious creatures. It sounds like such a dopey premise, but the trailer is creepy as hell. Emily Blunt (back on screen Christmas Day in Mary Poppins Returnsand John Krasinski (starring in Amazon’s Jack Ryan series) are the leads.

Children shouldn’t play with dead things, and these four teenage girls shouldn’t be dabbling in black magic to prove that a terrifying figure known as the Slender Man doesn’t exist. Well, it becomes obvious that they’ve awakened something when one of them abruptly goes missing.

The Purge film series is all about the one night of lawlessness when anybody can do anything they want without fear of being arrested. This film serves as a prequel, looking at the very first “Purge” event.

A spin-off of 2016’s The Conjuring 2, it’s set in 1952 at the Carta Monastery in Romania, where the unexplainable death of a nun is investigated by a nun, a priest and a novitate. Taissa Farmiga stars.

We’re not sure what the plot is, though this tale of an intergalactic hunter is reportedly set between 1990’s Predator 2 and 2010’s Predators. Among the cast is Boyd Holbrook, Olivia Munn and This is Us‘Sterling K. Brown. Writing and director is Shane Black, who wrote the original Lethal Weapon.

This is one of those films that’s going to go either way in the sense it’s going to be great fun or a complete disaster. In development for near 20 years, it focuses on Jonas Taylor (Jason Statham), a former Naval captain and expert diver, who becomes part of a deep sea mission to rescue Chinese scientists who are being attacked by what is essentially a prehistoric shark, the Carcharodon megalodon (it’s about 70-feet long!). The novel, written by Steve Alten, opens in prehistoric times where a T-Rex, wandering too close to the ocean’s edge in pursuit of prey, finds itself attacked and killed by Meg. Let’s hope that sequence makes it way into the film!

Once a cop, always a cop. Castle‘s Stana Katic is one who has recently gotten out of rehab, and is assigned the night shift at the city hospital’s morgue. Once there, strange things are afoot, which turns out to be the result of an entity that is residing within one of the….wait for it….cadavers.

Describes Focus Features, the film “tells the story of Dr Faraday, the son of a housemaid, who has built a life of quiet respectability as a country doctor. During the long hot summer of 1947, he is called to a patient at Hundreds Hall, where his mother once worked. The Hall has been home to the Ayres family for more than two centuries. But it is now in decline and its inhabitants — mother, son and daughter – are haunted by something more ominous than a dying way of life. When he takes on his new patient, Faraday has no idea how closely, and how terrifyingly, the family’s story is about to become entwined with his own.” Interesting that so many of the horror films in 2018 are period pieces. Well, it was interesting to us, anyway.

It’s very odd to think of this as a reboot (which it’s described as), because it kind of feels like there’s been a couple of hundred reboots in the series already. In this case what a “reboot” actually means is that the ending of the original 1978 film will be slightly altered, and that the nine subsequent films will be completely ignored. The new film — which once again pits Jamie Lee Curtis against Michael Myers — just take place 40 years after the events of the first movie.

In 1944, two American paratroopers are shot down over Normandy in the midst of the D-Day invasion. There they discover that the Nazis are using supernatural forces against them. Damn Nazis, always up to something! Produced by J.J. Abrams.