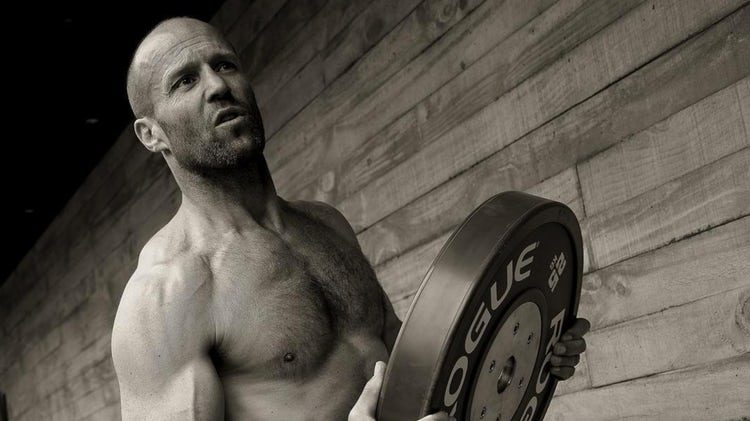 Actor Jason Statham is a complete badass, we all know that. Often playing the role of the hero who always gets the girl, the 49-year-old Brit hasn’t only shown to be charming on-screen, but off of it, too—after all, his partner is Victoria’s Secret model Rosie Huntington-Whiteley.

Statham has singlehandedly made men everywhere truly believe that they can look as handsome as he does bald, which is enough for anyone to develop a little mancrush on the guy.

Furthermore, Jason Statham has maintained a physique that few men his age are capable of keeping up, and he shared some of his fitness secrets to Men’s Fitness—and it sounds like the dude lives in the gym.

According to the article, the actor went to a California prison to get himself jacked up for his 2014 movie, Death Race, with Statham saying this about the experience, via Men’s Fitness:

The ripped cons worked out with explosive strength moves but little equipment. “They had banned weights from the prison yard,” Statham recalls. “They didn’t have the big, fat machines you have in the typical gym. These guys were using their own bodies for lifts, pullups, situps, and squats. They employed full-body-weight exercises and old-school gym techniques that seemed to work wonders.”

That’s quite the dedication, if you ask us.

It was from that penitentiary experience that led Jason Statham to incorporate more elements into his own, six-day-a-week routine, working with his trainer Logan Hood to design workouts that manipulate your own body weight and then add weights so that your muscles retain a functionality.

After hearing about Hood, a former Navy SEAL, from fellow actor Vinnie Jones, Statham said the trainer asked him one question: “How far are you prepared to go?” Hood says he knew from the first day of training that the actor was going to pass the test.

“I get them in [my gym], and I can look in their eyes and see if they’re full of shit,” Hood says. But with Statham, Hood knew from their first day of training that the buff Brit was a natural athlete who understood mechanics and movement.

After getting in the gym with Hood, Statham’s regime sure sounds demanding.

To prepare for each of his physically demanding roles, Statham trains hardcore for eight weeks prior to filming. For Death Race, Statham trimmed down from 189 pounds to a lean 168 in 11 weeks with interval-based training: intense circuits designed to elevate his heart rate. Then they transitioned into a steady weight-training circuit using barbells, kettlebells, and sandbags.

To play a knife-wielding mercenary in his newest film The Expendables, Statham added two hours of combat training with 87Eleven (the stunt guys behind The Matrix) to his hour-long workouts. The goal was to have Statham’s fast-twitch muscles moving and functioning at peak efficiency for the extensive fight sequences.

“We never do the same thing twice,” Statham explains. “We mix it up. You know how you know a good workout?” he asks. “When right before you do it, you’re like, ‘Oh, fuck, that’s gonna kill.’ Because you can’t hide in this gym. You can’t hide from what’s ahead of you.”

Jason Statham might not do the same thing twice during a workout, but it seems to be working well for him.

10 Rules For Wearing Sunglasses That Every Man Should Know