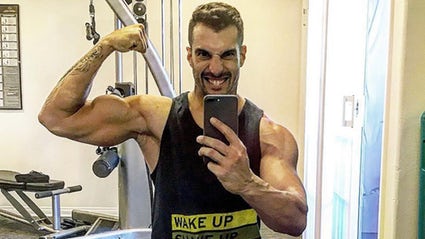 When it comes to lifting weights, we would say that most people are under the impression that the heavier the weight, the greater the result. Turns out, that’s why most people aren’t personal trainers, because, guess what? That couldn’t be further from the truth. Thankfully, we’ve got Joel Freeman, Beachbody Super Trainer and co-creator of “Core De Force” here to school us on a few weightlifting ins and outs that just might (read: will) revolutionize your workout.

It’s important to take advice from individuals like Joel who actually know what they’re talking about. With so much buzz surrounding workout plans nowadays, you don’t want to end up injuring yourself because you weren’t properly informed. Joel’s credentials speak for themselves, with over 15 years of experience in the health and fitness industry, Joel has held certifications from the American Fitness Association of America, American Council on Exercise and currently, a National Academy of Sports Medicine certified personal trainer.

From running day-to-day operations in gyms to directing Group X programming at Gold’s Gym® SoCal and even becoming a International Fitness Presenter, Joel is a fitness Renaissance man. That said, his passion is teaching and showing others hot to live healthy and fulfilling lives. We think with the information below, you guys will be able to do just that.

FHM: Let’s Start With Something Simple: Why Do Guys Think Heavier Is Better?

Joel Freeman: “Because many simply don’t know any better! The videos are all over the social media world (if you haven’t seen them, you’re welcome for the idea) of people failing under ridiculous amounts of weight, thinking that’s ‘how to grow.’ They think that if they lift as much as possible, then that’s how they’ll look the same as the fitness models they follow.”

FHM: What Are Heavier Weights Good For?

Joel Freeman: “Heavy weight with fewer reps (1-5) is great if you’re going for maximum strength or power output training. These types are quite common in CrossFit type facilities, but should not be attempted however, until a solid fitness and form foundation is established first.”

FHM: In Contrast, When Are Lighter Weights Best?

Joel Freeman: “Let’s be clear, lighter doesn’t have to mean those cute purple weights at the corner drug store. We’re just talking about weights that are light enough to help in developing a foundation of strength. Lighter weight can also still be “heavy” enough to challenge your muscles and help with hypertrophy training (make your muscles grow), which is what most guys are looking to do anyway.”

FHM: What Are Some Of The Benefits Of Using Lighter Weights?

FHM: Can You Give Us Some Exercises That Help Build Strength By Using Lighter Weights?

Joel Freeman: “You can still do all the cool, typical exercises to build strength and endurance:. Chest: Bench or Dumbell Press. Back: Cable Row or T-Bar Row. Shoulders: Barbell or Dumbell Seated Press. Legs: Leg Press or Hack Squat.”

See more advice from Joel Freeman by scrolling down, and follow him on Instagram to keep up with all he has going on.

FHM: If A Guy’s Looking To Get Toned, What’s The Best Way To Use Weight Training?

Joel Freeman: “It’s all about the weight used and the rep range, meaning how many times you’re lifting the weight. For optimum strength endurance and conditioning, you should be selecting a weight that you can lift between 8 and 12 times (reps) and between 2 to 4 sets total. Weight selection is key here, as you’ll want the last couple reps to be difficult to finish, yet without compromising form. If you can do more reps easily, then up your weight! You’ll also want to keep rest breaks minimal, usually no longer than 90 seconds. Sorry, you’ll have to check your Instagram AFTER your workout.”

FHM: How About Recovery Tips After Hitting The Weight Room?

Joel Freeman: “When you increase demand on your muscles, you’re basically breaking them down so they can rebuild to be stronger. That means they need recovery fuel, like additional protein in your diet. An easy guide to follow is about 1 gram per 1 pound of your body weight. (Note: your other calories and macros may need to be modified to meet this requirement.) Your muscles also need to rest to repair and grow! Aim for 8 hours of sleep per night and give at least a full 1-2 days before you lift that particular muscle group again, and stretch them out on off days to help reduce lactic acid buildup.”

FHM: Lastly, Is There One Key Rule That Men Lifting Should Know To Maximize Their Workout?

Joel Freeman: “Leave your ego at the door! The fittest people in the world did not achieve that level in a few weeks, or even months. Consistency and proper form in the weight room are key to building a strong fitness foundation to work from. This will help prevent injuries and keep you going in the right direction of growing muscle…and looking great naked!”

See more from Joel Freeman by following him on Instagram.

A Man’s Guide To ‘Manscaping’