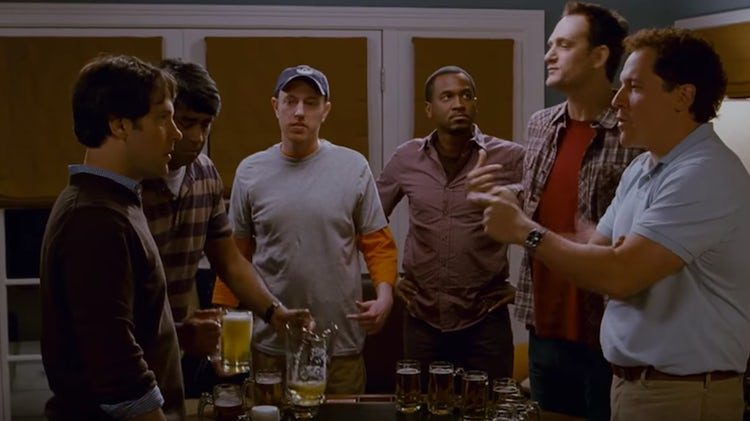 Movies are generally a form of entertainment meant to escape reality and have a good time. If you really think about it, the same can be said of alcohol. So, why not combine the two? Of course, feel free to drink a beer while watching a movie, but better yet, why not indulge in a film about drinking? It eliminates any chance of a hangover and is guaranteed to make you laugh your ass off.

As a sort of crash course in the best drinking/partying movies, I would start with the 10 below to get your feet wet. The hope is that most of you have seen them already, but there’s nothing wrong with a re-watch!

Who can forget this iconic scene? Frank The Tank coming out of retirement to funnel a beer and inevitably ending up streaking alone down the street, it’s cinematic gold.

I Love You, Man

If vomit is a problem for you, I don’t recommend watching this scene. If it’s not, prepare to laugh your ass off. Don’t we all have that one friend who maybe pushes their drinking limits just a bit too far? Of course it’s not cool to poke fun, but we all have a good time doing it.

Really though, enough said. This movie set the bar for drinking movies and continues to do so to this day. Since the movie’s release I’ve seen hundreds of people drinking out of beer boots and I couldn’t be happier about it.

What a beautiful coming of age tale. Really, it’s pretty iconic at this point. While the cops aren’t the main plot point of the movie, they certainly are memorable. If you don’t use the phrase “road beers” on a regular basis, you don’t deserve to watch this film.

Get Him To The Greek

In case you were ever considering drinking Absinthe, I’d go ahead and watch this scene first. The best you can hope for is your night turning out exactly like theirs. Plus, is there anything than Russel Brand saying, naughty water? I think not.

This scene is NOT for the faint of heart, but my god, is it funny! I feel like teenagers everywhere grew up with this image so heavily engrained in their brains that from there on out they always made sure to check their beer before chugging!

The Wolf Of Wall Street

Sometimes we have to wonder if this is what Wall Street really looks like. Then again, do we really care? A world where drugs and martinis over lunch is acceptable seems like a perfectly fine example of The American Dream. Of course, it’d be even better with Matthew McConaughey beating his chest and chanting.

If you thought this was a “chick” movie, you thought wrong. There’s all the elements of a killer comedy despite the largely female cast. One of the greatest scenes involves drinking on a plane, because that sounds like a solid idea right? Especially if you’re afraid of flying.

A bit cliche? Maybe, but a classic nonetheless. This drinking scene is iconic in the sense that it opens up a world of mess and hilarity in the plot to come. How about that ride in, huh?

Old school Adam Sandler flicks will forever have a place in our hearts. Billy Madison is by far the best one and this scene reminds of us how great he was back in the day. Who doesn’t enjoy getting black out drunk in the middle of the day?

People Reveal The First Moment They Thought, ‘Crap, I’m Not Young Anymore!’ And It’s Giving Us All The Feels