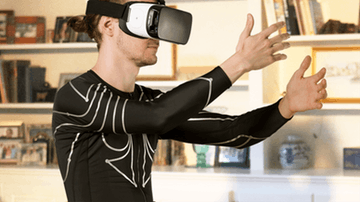 The Wild, Weird And Kick-Ass Future Of Gaming (What We Learned From CES, 2018)

For you techies out there, CES 2018 turned 50 last year, but don’t issue it an AARP card just yet. As cutting-edge and relevant a watchword of things to come for the high-tech universe as ever, it’s still the place to hit if you’re looking to get a sneak peek at what’s next for emerging tech. And if you’re a gamer, there’s almost nowhere better than CES.

Sure, industry-specific conferences, like the once-decadent E3 Electronic Entertainment Expo (a veritable three-ring circus for video game fans) and the massive Tokyo Game Show, which regularly brings in hundreds of thousands of attendees, can’t be missed. But as the elder statesman of the industry — and a long-standing annual favorite that shuts down the Vegas strip every January, bringing over 170,000 electronic enthusiasts to Sin City — CES 2018 still had much to say about where video games are headed going forward.

Case in point: In the coming months, you can expect the future of gaming to go far beyond what your parents experienced back in their wood-paneled living room. Just a few innovations you can expect to see shortly including the rise of high-end augmented reality games (which superimpose computer-generated characters and scenes over real-world images); turbo-charged virtual reality (VR) headsets for portable use; super high-resolution 4K and 8K TV screens capable of kicking out graphics so lifelike that action scenes will give you PTSD; and skin suits you can use to turn your body into a joystick. Still not impressed? Well, let’s just say the return of the legendary Game Boy and rise of 3D mobile games so powerful they’ll think you’re packing a supercomputer in your pocket are nothing to scoff at either.

As CES 2018 wrapped, it was startling to note on the gaming front how many products simply wouldn’t have been possible even 12 months ago. In short, all this new tech can only mean that the future of gaming will get even better within the next year and beyond. That’s why we asked world-renowned trends expert and futurist Scott Steinberg, author of Make Change Work for You and founder of SELECT magazine, to take a closer look at just a few of the hottest new innovations in the field that’ll be heading your way shortly.

Scroll down to see some of the new tech from CES 2018 that will define the future of gaming.

Need more room to soak up all those white-knuckle car chases and gut-clenching scenes of ultra-violence? Picture your TV screen literally taking over a wall in your house. The Samsung Wall displays images on a monitor that’s a whopping 146 inches big, all at 4K resolution, cranking out colorful and realistic scenes at a size typically reserved for IMAX movie theaters. Now if only we could afford a home that fit one…

Forget a joystick: The e-skin from Xenoma turns your body into a control pad. Picture a body suit, like the kind deep sea divers wear, except equipped with special sensors so your on-screen characters can move like you move. It is wireless and camera-less as well, giving it much more freedom than the Kinect and other movement-based controls.

Players who grew up alongside Nintendo’s old-school handheld will be pleased to greet its impending return, courtesy of manufacturer Hyperkin. New models will come with a backlit LCD screen, six hours of battery life and compatibility will most major games (including titles for the Game Boy Color).

As serious gamers know, it’s often all too easy to focus on setting up a home theater rig that amps up the graphics, but totally botches your sound setup. Luckily, this sleek, all-in-one sound system offers powerful speakers that can pump up excitement levels while blending right into living room. Even better, it packs 3.1 channel Dolby Atmos/DTS:X sound for couch-rattling excitement.

Smart gamers prefer wireless setups, but the most intense action titles usually require them to have a faster connection. MyLiFi attempts to address this issue by using a speedy, light-based technology that is actually more secure than your average Wi-Fi router to boot. Short for “light fidelity,” LiFi provides an alternative way to connect all your devices – and may become the standard in the future.

NVIDIA has made a 64-inch screen that’s ideal for PC gaming, and whose crazy high refresh rate and responsive visuals make it a smart choice for the hardcore. Like playing with impact? You’ll dig the unit’s 4K visuals too, which go a step beyond high-definition to deliver ultra-crisp graphics that really hammer home the impact of any on-screen encounter.

Ever wish you could take your smartphone home, plug it in and keep doing what you were doing on the road on a computer? Razer aims to make it happen with Project Linda. Simply put the Razer smartphone into the Project Linda laptop and voila – what’s happening on your mobile handset, including any gaming, quickly gets transferred to the larger laptop screen. The smartphone even stays useful, as it can be utilized as a touchscreen to help you control the laptop.

You don’t need to pack a desktop PC along in your suitcase to enjoy a premium gaming experience to go. The ultra-light HP Spectre x360 15 convertible laptop packs all the strength you need for your gaming needs. Its svelte frame is just 19.8 mm, way smaller than any oversized PC gaming setup, and the crystal-clear 4K resolution display comes ready to burn its way right into your retinas as well.

Looking for a new way to experience games? With the Vortx, you can actually feel the environments you’re playing in. The fan syncs with your games and blows the right air at the right time to get you into the action. The fiery depths of nerdy underworlds never felt so realistic.

Gaming on the go takes on new dimensions with LG’s OLED TV, which can be rolled and bundled up like a newspaper. More than five feet of screen may seem excessive, but imagine how cool your games will look when unfurled in front of disbelieving friends on-demand.